I feel whacked out.

A couple of weeks ago, I took a couple of sick days, with what I took to be a viral infection. Constant fatigue, aching limbs – but no other symptoms. It passed, and I returned to work.

In the last few days, the fatigue has returned – but in a more subtle way, that I can’t really attribute to a virus. I go to bed at a sensible time, sleep for 8 or 9 hours – and wake up feeling as tired as when I went to bed.

During the day, everything feels like an effort – even the most straightforward of everyday tasks, even getting up from my desk to make a cup of tea. Give you an example: even when busting for a pee, I’ll stay at my desk until I’m absolutely desperate – because I can’t even be bothered to go upstairs to the loo.

And it’s not only fatigue. My piles have flared up; a couple of days ago, I was in severe pain just walking home from work. I’m back on the bum bullets and the prescription gel. They’re under control now, but I’m having to be careful.

The eczema on both ankles has also flared up. I’ve had to buy betnovate, a eczema cream to treat them, every day for two weeks. It brings the eczema under control, but not to the point where it actually vanishes.

I went to the dentist today. The “nasty” area around my bottom left cavity has been giving me grief. The dentist says it’s the early stages of gum disease, to be treated with a high-powered mouthwash to stop it spreading and doing damage.

Work has been tough for the past few months. I’m been out of my comfort zone all year. Every new task involves areas which are largely new to me, and the information which I need isn’t readily available. The work is difficult, but not unsurmountably so. It’s just taking a lot of will power to apply myself.

I started the year in China. Shortly after returning, I started commuting to London. For five months, I lived out of a suitcase. Keeping on top of things at home was another struggle, when all I wanted to do was flop out. In the middle of it all, K lost his sister. He has needed a lot of support, and so has his family.

Outside of work, I have taken on a considerable amount of freelance music journalism work. I’ve reviewed nearly thirty gigs, over a dozen albums, several dozen singles, and the Eurovision Song Contest in Athens. Most weeks during the Autumn, I’ve been doing two gigs a week, sometimes three.

So the physical problems that I’m experiencing: as K gently pointed out this evening, they have to be stress-related. I may not be climbing the walls with stress, but that doesn’t mean that it’s not taking a steady toll.

Mercifully – and I have last year’s cognitive behavioural therapy course to thank for this – none of this has led the sort of depressive relapse which plagued me in the last half of 2004. I’m proud of this fact. Sure, there has been the odd wobble – but nothing which I haven’t been able to challenge and rationalise.

Next week, we’ll be on holiday, in gentle, tranquil, relaxing… Marrakech. Hahahahaha! But hey, a change is as good as a rest. I can’t wait, and neither can he.

In amongst all the helpful comments which people have left me (see next post down), these two (from Boz) have particularly struck me.

“Expect to get lost – but don’t mind if you do. Going with the flow is part of the fun.”

“All the traders will be out for your money, but actually, it’s part of the craic. Pretend you’re Indiana Jones.”

Excellent and much needed advice – because, by default, both situations could all too easily stress us out. I shall bear them in mind, Boz.

And finally, and just before I retire for the night: in amongst all the madness, we’ve still found time to cultivate a garden which looked like this, just before the village gardens open day in June. (It’s a professionally taken photograph, which may be appearing in a garden design book some time next year. I’ll tell you when I know more.) 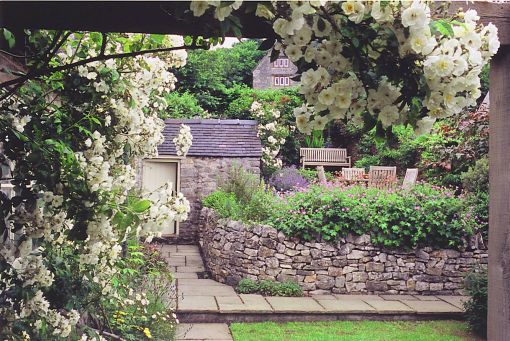 I’m proud of this, as well.

In fact, I’m proud of the way that I’ve handled a lot of situations this year.

But oh my darlings, I’m whacked.