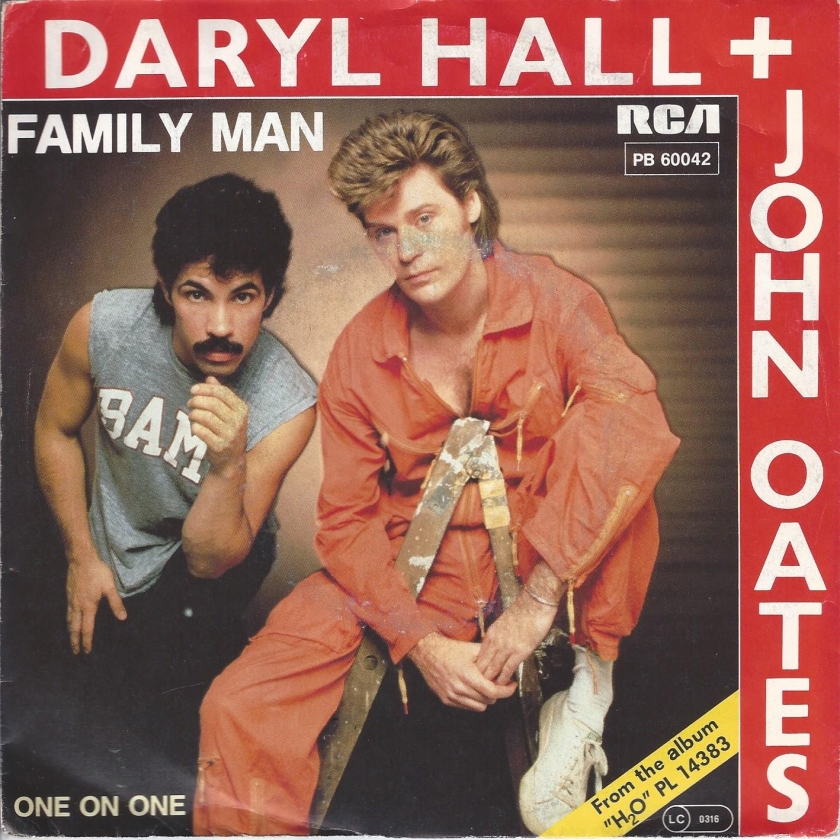 Two days on from Tina Turner, we’re back with the Finnish DJ’s job lot. This copy is a good deal less battered than “What’s Love Got To Do With It”, with a level of surface noise that’s easier to tune out. “Family Man” is the clear A-side, but for this European release, it’s been bundled with its predecessor “One On One”: an equally big hit in the US, which did much less well over here.

In 1983, Hall and Oates were at the peak of their success. H2O, the album which housed both these tracks, was their eleventh release and their biggest seller; it also gave them their fifth US chart-topper, “Maneater”.

“Family Man”, the album’s sole cover, was released by Mike Oldfield in the spring of 1982, with vocals by Maggie “Moonlight Shadow” Reilly. Although Hall and Oates remain fairly faithful to Oldfield’s arrangement, they’ve taken liberties with the lyrics, adding lines to later verses that make its “hooker rebuffed” story less clear-cut. This time around, the hooker’s prospective client changes his mind too late: “he waited much too long, but by the time he got his courage up, she was gone.”

“One On One” is a gentler affair, more in the tradition of the duo’s blue-eyed soul style, with none of the A-side’s clenched rock bite. It’s a love song wrapped round a sporting metaphor, which talks of playing the game, setting the pace, taking time out and so on.

If I’m sounding neutral here, it’s because I’ve always been basically neutral towards Hall and Oates. Their earlier work – with the exception of the heavenly “She’s Gone” – was too mature for my teenage ears, and their Eighties hits – with the exception of the equally heavenly “I Can’t Go for That (No Can Do)” – didn’t chime with my expectations of Eighties pop. That said, both tracks have worn well; history has been kind to this type of glossy AOR-pop, and it wouldn’t surprise me to hear “Family Man” at retro nights for cool millennials.

So maybe it’s time for me to dig into those early albums – the first two produced by Arif Mardin, the third by Todd Rundgren – and close this gap in my knowledge.

Yeah, I’ll stick them on a playlist. That’s what I’ll do.