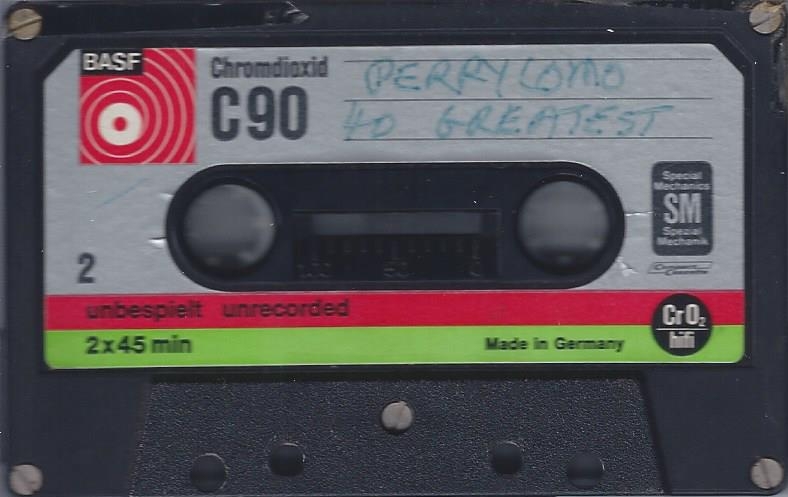 I have four cassettes in my collection with the inserts missing. They’ve been sitting there for years, keeping their mysteries sealed. I haven’t the faintest idea what I’m going to find on this C90, so this is really rather exciting. If you’re me.

Although I note with concern the inscription “PERRY COMO 40 GREATEST” on the second side, in my dear departed Dad’s handwriting, I also note with relief the application of Sellotape along the holes at the top edge of the tape. Younger readers – if I have any – may not know this, but you could protect a cassette from further recording by punching out these holes, thus preserving your priceless recording for posterity. Clearly, my dear departed Dad placed great value on his home-taped Como. But there was always a loophole, and that loophole’s name was Sellotape. Lay your tape over your holes, and bingo: re-recordability.

OK, so what have we got?

1. Don Henley – All She Wants To Do Is Dance

Oh dear. This is not a track I remember (so thank you, Shazam), and it’s not a track that I would have chosen to keep, either. Where did it come from? Was it taped from a friend?

“Forget about those pistol wavers” says an enigmatic Paul Gambaccini over the end of the track, just before it cuts off. Aha, so this was taped off the radio. There may be more Shazam moments ahead. I hope there are.

We must be in 1985: the year when the wheels came off the wagon, bringing a golden era for chart pop to a dull and worthy end. In which case, pickings may be slim.

“And I’ve grown to have a strong feeling for it. You might call it a craving. A love. An obsession.”

“Up five places to nine”, Gambo later informs us. So this must be a recording of his weekly US singles chart countdown: broadcast by Radio One on Saturday afternoons, if I recall correctly.

4. DeBarge – Rhythm Of The Night

So far, these tracks all scream 1985 drabness. I don’t own any of them in any other format. Instead, they’re all the sort of thing that I would have dutifully unpaused my tape deck for, without ever falling for any of them too hard. An exercise in Keeping Up, basically. And, oh, I had to Keep Up.

“Madonna moves up one place in the American Top Ten, from Four to Three.”

OK, so we’re not going to be stuck with this chart countdown for the full 45 minutes. Forgotten nugget excavation may still lie ahead.

I know this song backwards, so I’ve amused myself by searching for the chart in the Billboard archive. Here it is, then: April 13th, 1985.

Hold up! That’s exactly seven days before the Saturday that I met K, my future partner. In that case, I might give this tape a title: The Week Before You Came. Because if this was what I’d been doing with my Saturday afternoons – hovering over pause buttons for Animotion and DeBarge – then I was in need of urgent rescue.

I’m trying to remember when I gave K’s predecessor the heave-ho. (We only lasted a couple of months. It was all wrong from the off.) I have a distinct feeling that it was later this very evening, at the Sir John Borlase Warren pub in Nottingham’s Canning Circus.

This tape is taking on historic proportions.

And this track feels like it may never end.

7. Katrina and the Waves – Walking On Sunshine

This is the first song on the tape that I subsequently went out and bought. She was on the telly the other week, helping to judge this year’s UK Eurovision entries. Her microphone was up the spout, and it never got fixed. I felt for her, stuck in that eternal Eurovision loop.

I catch a snatch of Mike Read, introducing the track. I think we’re still in the same weekend in April; maybe this was the next show.

I’m picturing myself in my small rented room in Douglas Road, my University finals a couple of months away, without the faintest clue what I was going to do after graduating. They’ve been portraying this state of naive denial on the current series of Fresh Meat. It has struck a chord of recognition.

The tape blips momentarily in the pause between the end of “I Feel Love” and the start of “Johnny Remember Me”, its medley partner. Schoolboy error, Mike. Come on, you’ve been doing this long enough.

9. Bronski Beat – Close To The Edge

Shazam tells me this was the version that appeared on Bronski Beat’s patchy remix album Hundreds & Thousands, rather than the original version on the B-side of “It Ain’t Necessarily So”. I had completely forgotten about this track. It’s decent enough. The arrangement is a bit Hi-NRG by rote, but my tolerance was always high for that sort of thing.

10. The Pogues – Repeal Of The Licensing Laws

This rollicking instrumental was on the B-side of “The Boys From The County Hell”, which I own – but this sounds like it could have been from a live session instead.

11. The Pogues – Streams Of Whiskey

…which the count-off and slight microphone distortion on this track confirms.

Are we going to get the full session, then? That would be nice.

Is this the least witty novelty song ever written? Some of the puns, all derived from the names of US states, barely make sense. (“How did Wiscon sin, boy?” WISCON ISN’T EVEN AN ACTUAL NAME, GAH)

Praise be. And pray for me as I flip it over, to the side marked COMO.

“Pull me up, pull me up, pull me up, reach out and save me” – I couldn’t identify this track, which sounds like a cross between Carmel and The Creatures, with a sparse supper club feel and copious use of harmonica. Shazam and Google could tell me nothing. And then, thankfully, John Peel appears, giving me both artist and title.

15. Skipworth & Turner – Thinking About Your Love

The recording quality is suddenly much rougher. The track fades after less than a minute, as Kid Jensen’s voiceover reveals this as the Network Chart show. Reception issues, or had I swapped from the hi-fi to the ghetto blaster?

Bargain basement Sister Sledgisms – and as such, very 1985 again. We are still in late April or early May. Was this still The Week Before He Came, or was I still doing this sort of thing during our early courtship?

Or was I back alone in my room, ostensibly for revision purposes, but letting the urge to Keep Up distract me yet again? It’s a wonder I got a 2:1, it really is. Ugh, this track.

“A big drop for U2” says Jensen. A quick bit of chart-hunting points this recording towards late May, a month into our blessed union. Oh dear.

There’s something haunting about the sound quality of this rough radio recording. It’s a type of sound that I don’t ever hear any more. It doesn’t altogether diminish the splendour of this splendid piece of work.

19. The Untouchables – Free Yourself

I thought they were a US ska band, but this is bar-room Blues Brothers  soul revue fare. Were Hepworth and Ellen bigging it up on Whistle Test? I bet they were.

What bliss this is. I finally got to see Scritti four years ago. It was also the first time I saw Sleaford Mods, who were supporting them at Nottingham’s Rescue Rooms. After the show, I nervously approached Jason outside the venue, and bought a CD copy of Wank for a fiver, which he extracted from the pocket of his big coat. They’ve done all right for themselves, haven’t they?

The first time I came across Five Star, they were performing this, their debut hit, on Pebble Mill, a lunchtime TV show, in front of a clutch of nonplussed grans. Strewth, did I ever do any work?

By this stage, Depeche hits were getting a bit interchangeably Blah, were they not? “Master And Servant”, from autumn 1984, was the last that I bought. Then came “Blasphemous Rumours”, and I got off the bus.

In which Weller got political again, and student lefties like me rejoiced. Since the collapse of the miners’ strike two months earlier, there hadn’t been much to rejoice about. I remember this closing a Whistle Test, and Andy Kershaw getting quite carried away.

Shortly before meeting K, I went to London for the weekend, heard this everywhere, and returned to Nottingham impatient for its release. For a few weeks, this was THE tune. Then we all got sick of it. A prime example of what Grandmaster Flash used to call a “used groove”.

The surface noise is shocking. My dad didn’t treat his records with much respect. Perhaps it was left out at a party, and copped for a sticky slosh of Watneys.

Not a patch on the Andy Williams version, the theme from Love Story, which Father used to play on 8-track cartridge in the car on the morning school run.

A live recording, with the traditional smattering of applause after the titular opening line. This collection reached Number One in 1975, which means that Marcello Carlin has written about it at length on Then Play Long. Go and read him, he’ll tell you more than I ever could.

The tape ends here, with around 30 seconds of silence. It was unlike me to have skipped writing out the track listing. Perhaps I had intended to wipe over the rougher tracks on Side Two, before finalising the tape. But my recording-off-the-radio days were drawing to a close, and this might even be the last such tape that I worked on. As a single man, and as a student seeking displacement activity, I’d had plenty of time for these things. But as a partnered graduate entering paid employment, other priorities were taking over.