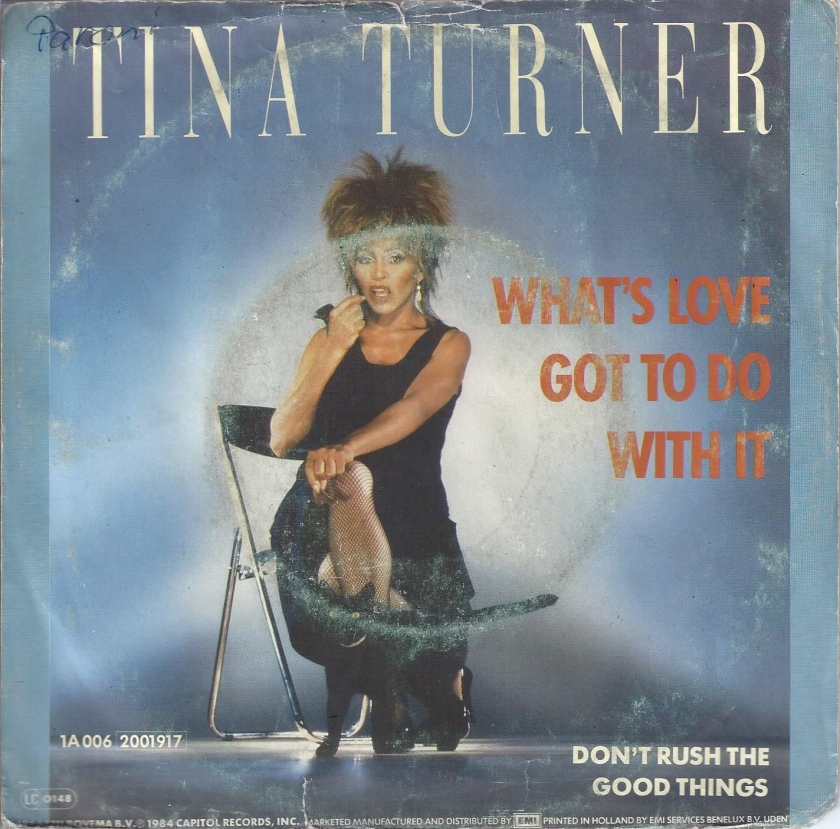 For Christmas, K gave me a copy of Eilon Paz’s sumptuous coffee table book, Dust & Grooves: Adventures In Record Collecting. Over the course of its 436 pages, a diverse array of record enthusiasts display and discuss their collections. In each case, you get the impression that every record has been lovingly curated, and that each collection can be viewed as a physical representation of its owner’s personality and passion.

As for my own equally vast and sprawling collection, I couldn’t begin to make the same sort of claim. It’s not so much lovingly curated, as haphazardly accumulated. There are duds galore: random punts, impulse buys, bargain-bin hoovering exercises, ephemeral fancies, over-hyped disappointments, artist loyalties that stretched too far. Too often, I’ll pull out a record or a CD, and think to myself: what the hell is that doing here?

And so it is with this battered copy of Tina Turner’s second comeback hit, which took her long-stalled career to new heights, turning her into a global superstar at the age of 44. What the hell is this doing here? I never cared for it much at the time, and I’ve never warmed much to it since.

“What’s Love Got To Do With It” snuck into my collection in the mid-Nineties, as part of a job lot. A Finnish friend had moved to the UK, and was purging dead weight. He’d worked as a DJ, playing the hits of the day in his home city’s bars and clubs. Feeling generous, I swept through his stack of seven-inchers with a wide net, filling in gaps and erring on the side of “well, it might be useful to have this in stock”.

You can see from the cover scan that this has been played out a lot, and you can hear it in the grooves, too; the crackle is considerable. That aside, the pressing’s a good one, surprising me with the punch it still packs. (I’d forgotten about that reggae-inflected bass, although it’s still more Men At Work than Marley.)

These days, “tastemaker singles” are an established part of the promotional process. Put something out on a small label over the autumn, just in time to reach the “Sound Of…” voters, then hit the market big time in the spring, with a more commercial offering. Looking back at the Tina Turner campaign, it’s tempting to see something similar at work. Charting in November 1983, her first comeback hit, “Let’s Stay Together”, carried the cachet of B.E.F./Heaven 17 (who had also produced her cover of “Ball Of Confusion” a year earlier, on their critically acclaimed but under-selling Music of Quality and Distinction). Then, having primed us with a “Tina gets cool again” move, Capitol wheeled out the big guns.

Producer and co-writer Terry Britten had a solid track record, having revitalised Cliff Richard’s career with “Devil Woman” and provided B.A. Robertson with a string of hits. “What’s Love Got To Do With It” had already been hawked around a few acts – Donna Summer, Phyllis Hyman, Bucks Fizz – but it must have felt like a natural fit for Turner’s style: battle-hardened and bruised, yet still flirty and sassy. Who else could sell a line as breathtakingly cynical as “what’s love but a second-hand emotion”, while still hoofing and vamping and making you think: ah, good old Tina, I’ll buy into that?

Well, that’s how I see it objectively – but in truth, Comeback Tina never moved me much. I hear showmanship, technique and personality by the bucketload, but I never get a true sense of soul. That rock edge to her voice? It’s the wrong sort of rock for me. I get the “what a gal, what a survivor, isn’t she great for her age” aspect, but I can get no further. Perhaps this song was given added autobiographical heft when it was chosen as the title of her 1993 biopic – but it hadn’t been written with Tina in mind, and the retro-fit came too late to convince me.

Instead, my abiding Turner memory is of gazing blankly at her, stadium-strutting on a Pepsi TV commercial with the sound turned down, while playing Laibach’s cover of Queen’s “One Vision” and drawing the sort of parallels that only Laibach could induce.