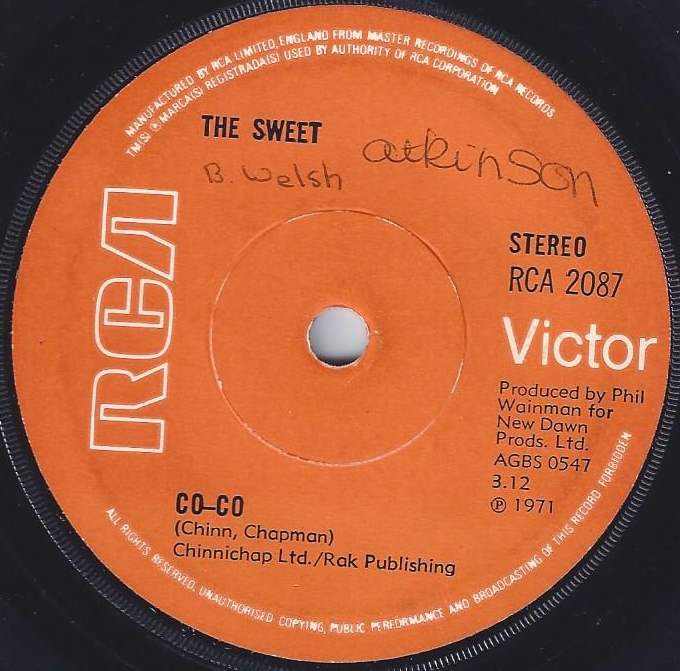 By most people’s yardsticks, it’s hardly a classic – quite the reverse, you might well say – but for nine year-old me, the UK singles chart of 1st-7th August 1971 marks the point where it all began.

It was the summer holidays, and I’d just been given my first transistor radio, a source of constant fascination. I mostly kept it tuned to Radio One, whose daytime playlist exactly mirrored the top of the charts. Within a week or so, I could recognise the biggest hits within seconds – and could quote you their chart positions, too.

T. Rex were spending their third week at Number One with “Get It On”, with its predecessor, Middle Of The Road’s “Chirpy Chirpy Cheep Cheep”, still hanging around at Number Three. I preferred the latter: super-catchy, but with an undertone of melancholy (this was, after all, a song about an abandoned child). The New Seekers had climbed to Number Two with “Never Ending Song Of Love” – those swoonsome doo-doo-doos and ba-ba-baas! – and there were two lilting, easy-rolling folk-country songs at Six and Seven, by Lobo (“Me And You And A Dog Named Boo”) and New World (“Tom Tom Turnaround”). Atomic Rooster were at Four with “Devil’s Answer”, a song containing a word that I literally didn’t dare to speak out loud; even “Good Heavens” was considered too sweary for our family back then, and I wasn’t going to take any risks.

Songwriters Nicky Chinn and Mike Chapman, on the threshold of becoming major players, had two singles in the Top Ten. As well as “Tom Tom Turnaround” – the only single from this chart that I went out and bought, and indeed the first single that I ever bought – they had landed their second hit for The Sweet, two places above it.

“Co-Co” had everything I wanted from a pop song: a distinctive intro, well-turned verses which exploded into a massively hooky chorus, a sunny arrangement (those steel drums!), a high-pitched vocal that I could squeak along with, nonsense words (I was big on nonsense), bags of repetition, and a string of rising key changes could have carried on rising forever, well beyond the fade.

I really should have bought it instead of the New World, but it turned out that 45s cost more than I was expecting, and so my pocket money could only stretch to one of them. Panicking at the counter of Boots in Doncaster’s Arndale centre, I blurted out the first title I could think of. This too set a pattern; of the thousands of purchases I’ve made since, a dismaying proportion have been similarly ill-considered. (Hello, Nineties.)

A couple of years later, a copy of “Co-Co” turned up in our village, on a trestle table at a church fete, for mere pennies. I think my sister bought it; it’s her handwriting on the label, next to the original owner. Even then, it felt like a period piece; The Sweet had progressed from cod-calypso to full-on glam stomp, and so it paled in comparison to the might of “Blockbuster”, “Hell Raiser” and “Ballroom Blitz”.

Meanwhile, The Sweet pursued a parallel path on their self-penned B-sides, which they claimed represented their true worth as a serious hard rock band, as opposed to purveyors of manufactured pap. But in truth, the sub-Deep Purple-isms of “Done Me Wrong All Right” are nothing worth shouting about. They finally got their way in 1974, on their second album Sweet Fanny Adams, dropping the definite article and reducing Chinn and Chapman’s contributions to a mere two tracks. There will be more on that if the randomiser permits.