Visited the Alstonefield Scarecrow Festival. Y’know, for the kiddies, like. Marvelled, non-patronisingly, at the rich untapped seams of ingenuity and creativity to be found in rural communities etc etc etc.

Early train to Newcastle. Best day’s work in ages, as I was reminded of what it feels like to be working in a team. Finished the evening in a gay bar called Switch, alternately staring dumbly into the middle distance at the teenagers bopping around on the carpet, and plaintively texting ex-Newcastle resident Alan for moral support.

Left Newcastle with renewed sense of professional purpose. While changing trains at dreary old Chesterfield, discovered a waiting room adorned with really rather decent C20th paintings, on loan from the late Duke of Devonshire’s collection at nearby Chatsworth House. These raised my spirits enormously.

I swear that my mother is looking younger with each passing year; maybe it’s the new shorter haircut. Anyway, it gives me immense hope for the future. Our favourite country pub is unexpectedly one chef down in the kitchen, meaning a long wait and our first ever disappointing meal there (their “Greek lamb” tasting suspiciously like shrivelled, stringy beef to us).

With four of the country’s top display teams competing to show off the very best of their work, the Shugborough Festival of Fireworks provides me with the most intense and sustained set of visceral thrills since I stopped going to Trade – especially when beat-synched with split-second precision to Darude’s Sandstorm. Seriously, none of us have ever seen fireworks quite like this before. Next year, we’re dragging along everyone we know.

The perfection of the morning (glorious sunshine, breakfast in the garden, thick scent of honeysuckle, pale pink fuschia busting out all over) is punctured by the horror story blaring from the front of both newspapers; impossible to reconcile the two.

After a pub lunch of some eccentricity, we attend the horticultural society’s prize dahlia auction in the memorial hall – the ginormous orange and lemon blooms looking like the sort of hats that Princess Margaret might have worn in 1973.

On the phone later, our journalist friend hopes he didn’t overstep the mark with his gently teasing wind-ups of my mother (“I wanted to make her feel included, to treat her just like everybody else“) – for my part, I was delighted that for once, we weren’t all treading on eggshells around her.

The consistently splendid Richard Griffiths gets all the best lines in the delightfully bawdy Stage Beauty – a worthy successor to Shakespeare In Love.

Thence to George’s, and the aftermath of a gay version of an Ann Summers party (I particularly liked the cockring with the orange plastic teddy bear attached; very Alessi meets Philippe Starck), where some of the remaining guests are lustily singing along to early Beatles hits (although it’s far from being a gay venue, I like the fact that if George feels like hosting a gay sex toy party, then she damn well will).

The night finishes at Peter “Sleaze Sister” Martine’s first-Monday-in-the-month-is-homosexuals-night @ Faces in the Lace Market, where the reigning Mr. Gay UK (the one who won that reality TV sports thingy on Channel 4) treats us all to his debut single (a cover of We Are Family – really, you don’t want to know) … a night which is entirely redeemed in three minutes’ flat when they play The Shapeshifters’ transcendent Lola’s Theme (“I’m a different person,
yeah, turned my world around…“)

I don’t mean to pry, but what was up with Franz Ferdinand’s drummer at the Mercury Music Prize awards? Because in the winners’ interview at the end, he looked pale and green and really Not At All Well. Oh, and he was openly yawning … the ingratitude!

Couldn’t really get into PJ Harvey’s show at Rock City tonight; it was all a bit tame and polite and inconsequential, and I was certainly expecting more of a “performance” from her. Maybe she’s just not suffering enough these days? Verily, contentment is the enemy of Great Art…

Finished off my from shuffle to schaffel megamix (13 tracks, 15 minutes, 17.88mb) and posted the link on ILM. If you haven’t heard of schaffel yet, then I dare say you soon will: basically, it’s dance music with pairs of dotted crotchets and quavers (CHUNK-A CHUNK-A CHUNK-A CHUNK-A) instead of steady four-to-the-floor beats (DOOF DOOF DOOF DOOF), which evolved from shuffle blues through 1970s glam-rock and the short-lived electoclash phenomenon. How FABULOUS that after all these years, dance music should FINALLY discover a new rhythm; whatever will they think of next?

Haircut in 35 minutes, so I’d better dash. Private viewing of Lewis Noble’s new stuff this evening. Bottle of wine and Will & Grace to follow (always the best night of the week).

No plans. Peace and quiet. Just the way we like it.

Buni and I will be attending the free screening of Eisenstein’s Battleship Potemkin in Trafalgar Square, with a new score by the Pet Shop Boys, accompanied by the Dresdener Philharmonik, with staging by Simon Burney of Theatre de Complicité. If you’re going to be there, then please shout out in the comments.

Later on, we’ll be heading to the very epicentre of Haute Swish: DTPM @ Fabric; Buni has already invested in those shiny almost-clear sunglasses that they all wear, so he’ll fit in fine, but I’m still stuck in Outfit Indecision Hell – honestly, nobody knows how I suffer.

Firstly: a fleeting snapshot is all too liable to be read as a definitive portrait. (Particularly when one flounces off for a few days offline, leaving the posting in question dangling morosely at the top of the page.)

Secondly: for this blogger at least (although this is manifestly not true for others, whose grace under pressure I humbly salute), wobbles are the enemy of free creative expression. For, lo: even as the well of inspiration runneth dry, so doth the reservoir of confidence evaporate. And with neither inspiration nor confidence, I am as nothing.

In spiralling Benny Hill circles, bony, stunted little words fruitlessly chase after the big sexy, ideas that will flesh them out and make them whole.

As energy returns, so inspiration trickles down and through. Order is restored, as the currents are reversed: the ideas once again starting to generate and shape the words that will best express them.

Some words and ideas, however, are best expressed – can only be expressed – far, far away from here. So expect something of a sporadic, spluttering service for the time being. An occasional spiritual spittoon, if you will.

Honestly though, I’m OK. Sweat not. 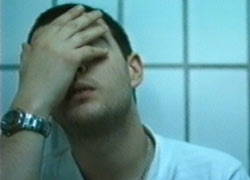 Mike Skinner, on the radio: (plaintively)
And I’m just standing there. I can’t say a word.
Because everything is just gone.
I’ve got nothing.
Absolutely nothing.

Lydia, who turns eight tomorrow: (witheringly)
He’s got a dog.