All rehearsal photos taken by Andrew of All Kinds Of Everything. Andrew’s Flickr stream is here.
Click each song title for the lyrics, and for a link to the official preview video. 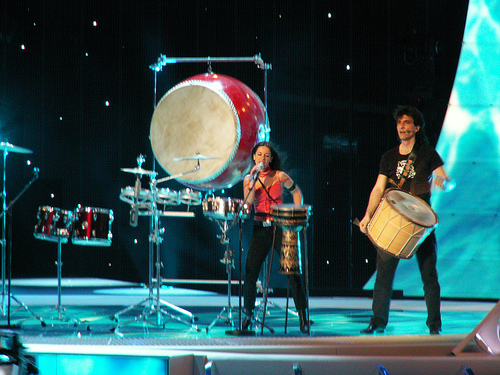 Before we crack on with this year’s previews, I have a Serious Complaint. Careful perusal of all 42 sets of lyrics has revealed that not one single entry has opted to rhyme “fire” (fye-YA!) with “desire” (diz-EYE-ya!). This is clearly a gross violation of agreed European Rhyme Quotas, and it Must Never Happen Again.

And so to Bulgaria, who kick off our record-breaking twenty-eight song line-up with a full tilt ethno-trancey-dancey thing, featuring impassioned yelps of “more pee!”, and a return to the Big Drumming which so memorably defined the 2005 contest.

In translation, the lyrics conjure up some incongruously pastoral images:

There’s a young lad coming from the village,
Walking by his side’s a wild young pony,
See him walking there, hear him singing, eeee!

However, said pastoralism quickly yields to that other great ESC stalwart, the meaningless refrain:

Although an absolutely cracking track, and one of my favourites of this year’s selection, the whole thing is a bit too Big Room, Peak Time, Rushing Off Your Second Pill, Oakey Tears The Roof Off for such an early stage in the proceedings. Placed later in the draw, we might have had a chance to warm up (in a strictly non-narcotic sense), but this is a glaring case of Too Much Too Soon, which isn’t helped by a total lack of supporting choreography. Instead, Elitsa and Stoyan appear alone on stage, rattling and bashing their instruments of choice, but without any means of a visual build-up. (One is instantly reminded of the upside-down “roast chicken on a spit” breakdancing of last year’s Club Anfem from Romania, the mighty “Tornerò”. Ah, such memories.)

If you were thinking of giving the first few songs a miss, then I implore you to re-consider. This is an exceptionally strong opening run, and there will be plenty of time for toilet breaks later. Plenty of time.

Almost every contest in recent years has a Conceptual Art-Joke Prankster act, in which a suspiciously literate looking bunch of overgrown students with Performance Arts subsidies get to play dumb for the night, in the name of Subverting The Norms and F**king With Your Minds, Man. Here’s a text-book example from the country that gave us the mighty Ping Pong in 2000 (we all remember Ping Pong, don’t we?), which lurches back and forth between bouncy Manu Chao-isms and shouty agit-rock, while still finding time to squeeze in a Hebrew rap drum-and-bass breakdown.

In a contest whose most unappealing sub-genre is the World Piss Anthem, “Push The Button” articulates a desire for World Piss (“I want to see the flowers bloom! Don’t wanna go Kaputt Ka Boom!”), without being all pissy about it. It’s well aware of its own absurdity, but in an Alf Poier way rather than a Scooch way.

(Ah, Scooch. We’ll get onto them later.) 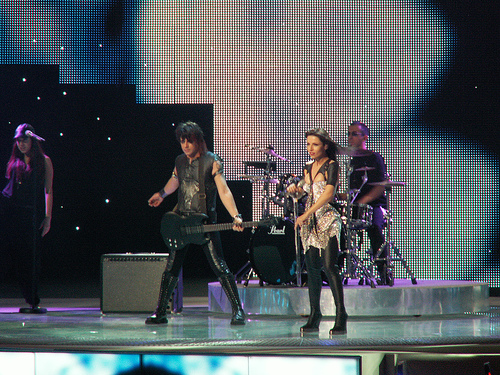 Representing Cyprus for the third time (it’s OK, I don’t remember 1992’s Teriazoume or 1994’s Eimai Anthropos Ki Ego either), Evridiki plays right into the hands of Eurovision’s, ahem, core constituency with this hands-in-the-air belter, which straddles the divide between Schlager and Eurodance in a most reassuringly familiar way. The decision to sing in French is a strange one, which will pick up fewer “political” votes than was perhaps intended – but the song works, and the “accredited journalists” d’un certain age will be squealing over this all the way to the Euroclub.

OK, forget the “his mother wanted a Princess Diana lookalike” story, and prepare to chuckle at the lyrical innuendo one last time. (“You set my beating heart in motion, when you cast your loving potion over me. But mind the sheets.“) They are but mere red herrings. Instead, think Bond Theme. Think Dima Bilan (“Never Let You Go”, last year’s runner-up). Think wall-climbing dancers. Think “powerful vocal presence”. Think man-cleavage. Think cheekbones. Think pedigree (composer Philip Kirkorov is Russia’s biggest musical superstar). Think drama, drama, DRAMA. This is a hotly tipped favourite, and the first guaranteed qualifier of the night.

Aha. This is the first – but no means the last – example of the inevitable Lordi Effect. Just as Ruslana’s victory in 2004 led to the Big Drum Fest of 2005, so the victory of “Hard Rock Hallelujah” has opened the doors to Rock in 2007. Schlager-pop this ain’t. But frankly, on the strength of “Valentine Lost”, would that it were.

“Veteran rocker” Eiríkur Hauksson, who has previously worked with members of Thin Lizzy and Uriah Heep, has admittedly toned things down a little for the ESC, and the song is essentially a power ballad in Jon Bon Jovi drag. The lyrics comprise little more than a random list of well-worn signifiers (“A tiger trapped inside a cage, an actor on an empty stage”), and as such they do their job efficiently enough, but I can’t see this one qualifying.

I’ve tried extra-specially hard to like this one from plucky newcomer Georgia, as it’s Looby‘s favourite and I hold his opinions in high esteem – but, well, it’s all a bit busy, isn’t it? This is the third number in a row to reach for the High Drama aesthetic, and frankly, at this stage, I’d be happier with a dollop of Low Farce. (We’ll come to the Ukraine later.)

OK, so this is clever stuff, deftly orchestrated and with all manner of intricate twists and turns – including a moment where the whole arrangement collapses down to two rather incongruous electronic bloops, for no apparent reason. Once again, it’s also a bit Bond Theme in places. Give it half a dozen more plays, and I could learn to love it – but plonk it in as Song 6, with 22 more to go, and I fear that it will be buried in the mix.

Making their debut as a newly independent republic, following last year’s acrimonious split from Serbia, Montenegro field the second of this year’s rockers. I don’t propose to waste much time over this one, as it’s pretty bloody awful. Certain wags in the hall have renamed it “Itchy Crotchy”, and that’s about as much entertainment value as you’re likely to glean from it. Early toilet break!

Initially a hotly tipped Fan Fave, opinions have been wobbling over this one during the rehearsals, although the consensus remains that it will definitely qualify. DJ Bobo is a man with form in Europop circles, and this is certainly one of the more intricately wrought and professionally presented entries. It’s an Everything But The Kitchen Sink Eurodance Pounder, with Ooky Spooky Bits, Widescreen Orchestral Flourishes, and a Cast of Thousands, whose numbers have been craftily boosted by a bunch of mannequins lined up at the back of the stage. Yes, it’s exciting – but is it also too cold and over-cluttered to warm the hearts of the tele-voters?

Nevertheless, oi’ll give it foive. See you on Saturday, Switzerland. 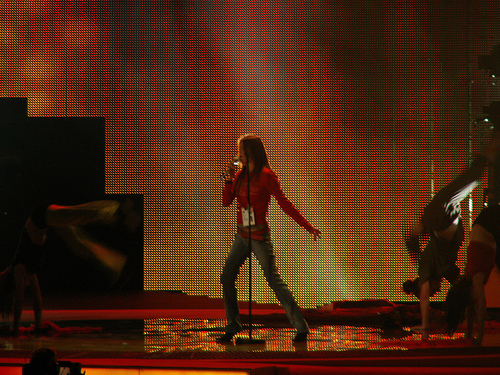 “I like the intro, which has real potential to be the new theme for BBC Look East. The first line should be “Top stories in the region tonight” and be accompanied by a few bongs. As it were.” – Nick at OnEurope_Live.

A big Hurrah for the first appearance of that perennial stalwart, the Gypsy Fiddle! And an equally big Woo-Hoo for the first flutterings of that other trusty standby, the Big Flags! Other than that, there’s little to get in a froth about. Mid-paced, high drama, soft rock, a bit of high-register wailing towards the end. Those as like this sort of thing already have Belarus’s Koldun to service their needs, so this one will be swiftly forgotten.

Edsilia last represented the Netherlands in 1998, placing fourth with the totally spiffing “Hemel En Aarde”, and so my expectations were high. Hmm. This clearly isn’t in the same league – but once the dull openening is dispensed with, it struts its stuff in a tolerably efficient, well scrubbed, bright ‘n breezy Scandi-pop sort of way.

“I particularly liked the bridge from the ballady opening into the schlager chorus, which was reminiscent of a clapped out Ford Capri trying to get up the ramp in the multi-storey car park in Bedford shopping centre. It got up there just about, but I thought for a moment it was going to conk out halfway up.” – Nick at OnEurope_Live.