Yesterday, I said that for each copy of Shaggy Blog Stories sold, £3.63 would be donated to Comic Relief.

As my share of the profits from the sales will initially be paid into my bank account, Comic Relief will receive it from me as a “personal donation”. This means that they can claim an additional 28% of the money directly from the government as Gift Aid.

So in actual fact, Comic Relief will receive £4.442 for every copy sold, i.e. 49.6% of the cover price. That, my friends, is a remarkably high royalty rate.

And of course, it’s far from over yet. So I’m going to start keeping a sporadically updated running total at the top of the blog. Keep checking for updates.

Some very early editions of the book may contain a couple of rather glaring typos, since corrected. If you are lucky enough to receive one, then cherish it. They’ll be worth a mint one day. You know, like stamps.

It has been suggested that a single signed copy of the book should be auctioned off for eBay. Now, obviously, posting a book between 100 different addresses would be a logistical nightmare, and would take months to accomplish.

So what I suggest is this. All 100 contributors (101 including our cover artist) are invited to sign their names on a sticky label, and to mail it to me at a postal address which will be supplied by e-mail. I shall then place each sticker inside the book, as close to the relevant entry as available blank space will allow.

We may not get the full 101. But I reckon we’ll come pretty close.

After the rigours of the week, I knew that I was going to come crashing down to earth with a bump. I just didn’t realise that half the morning room ceiling in the cottage was going to come down with me. As we discovered when we got there last night, in high spirits, and ready to celebrate the book launch with champagne and fish & chips: 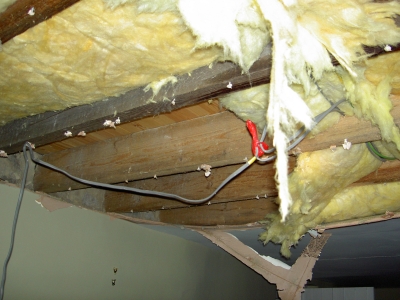 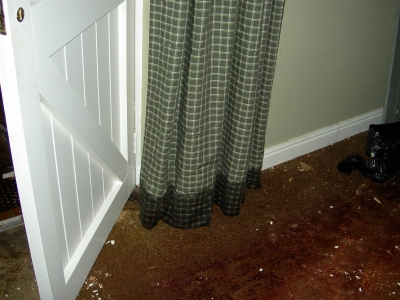 Something had sprung a leak in the upstairs bathroom, and the water had been accumulating in the gap between the floorboards and the plaster ceiling, before bursting through some time during the week.

Well, that seagrass flooring was on its way out anyway. At least we can replace it on the insurance.

However, one thing that can’t be replaced is the beautiful Antonia Salmon ceramic which was bought for our civil partnership, using the money that K’s sister had set aside for a present before she died, shortly after the ceremony. K had chosen the ceramic himself, and regarded it as our memorial to her.

Various friends in the village spent nearly two hours last night fixing the leak, salvaging our possessions, and clearing away the rubble. Meanwhile, other friends looked after K, who was too distraught to remain inside the house. The evening finished with a dozen of us getting merry round D & T’s kitchen table (chicken pie and home made chocolate cake also provided), thus allowing us to forget about the wreckage for a brief while.

Once again, we were reminded what an amazing village this is, and how lucky we are to live here. If we’d had the same problem in Nottingham (we live in The Park, which is a kind of posh person’s ghetto), our neighbours would probably have invoiced us for their time.

K and I rolled back at midnight, shut the door to the morning room, opened the bottle of vintage champagne which had been earmarked to toast the launch of the book, and got steadily plastered in front of an Old Grey Whistle Test highlights DVD, stumbling to bed at 3am.

After all the work that has been taking place in the Nottingham house over the past couple of months – new kitchen, and now a new garden – the cottage has been our sanctuary. No longer. (K, in a major Drama Queen moment: “Both our properties are in turmoil!” It’s OK; we know what we’re like better than anyone. And yes, we’ve both read My Tornado Hell, thank you.)

I shall take this as an opportunity to stand shoulder-to-shoulder in suffering with some of the very people that Comic Relief is trying to help – several of whom don’t even have morning rooms.

Oh, did I not mention that we’re having a new garden (PDMG II) installed in Nottingham? The work started on Monday, the first task being to rip out all the thick concrete from the sizeable yard area that’s being converted. Great week to write a book, eh? During most of Wednesday afternoon and for much of Thursday, as I worked my way through the submissions, the typesetting and the proofing, a loud pneumatic drill was being operated just beneath the study window. Although to be honest, I was so focussed on the task in hand that I barely noticed.

Oh, and we’ve been Instapunditted. Hello America! Buy our book!