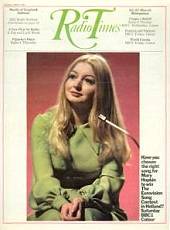 Ah, who could forget the two-way diva-meets-diva Bitch Fest of the 1970 Eurovision Song Contest, as Opportunity Knocks winner and Beatles protegé Mary Hopkin was pitted against that lilting colleen from across the Irish Sea, Dana Provincial?

I was already a fan of La Hopkin, having seen her and Tommy Steele in panto at the London Palladium, where we all sang along to her big hit, Those Were The Days, as well as Steele’s “Junior Choice” favourite, Little White Bull. And I was already a fan of Eurovision, having watched Cliff Richard being pipped at the post by Spain in 1968, back when the contest was screened before my bedtime. This time round, as with Lulu in 1969, I wasn’t allowed to stay up late, and so relied on my grandmother’s account of the evening. She had been most unimpressed with Lulu’s allegedly scruffy demeanour (“Straight off the plane! The silly girl had no time to comb her hair!”), but was charmed by Mary – and Dana – in 1970. So much so, that she bought us copies of both their singles.

As my sister’s kindergarten class had been singing it at school (something which I considered terribly daring and modern), she was given Dana’s winning song All Kinds Of Everything, with the equally lilting Channel Breeze on the flip. Meanwhile, because I had been following the weekly Song For Europe qualifying contest so avidly, I was given Mary Hopkin’s single, on the Beatles’ Apple label – backed with the runner-up song, the even more jaunty I’m Going To Fall In Love Again (The Very Next Chance I Get).

There had been singles in our house before – the earliest being The Beatles’ She Loves You, which I regard as Side One, Track One of my entire life – but, aside from kids’ records (Johnny Morris from TV’s Animal Magic telling the story of Lorenzo The Llama; Vivien Leigh – yes, that one – reciting Beatrix Potter’s Tale Of The Flopsy Bunnies), Knock Knock was the first one that was actually, officially mine. A lifelong interest in Eurovision (apart from a few years when it went a bit crap in the 1980s) was born.

Looking at the lyrics now, my twisted 21st century brain can’t help wondering whether there hadn’t been a risqué subtext to this seemingly harmless ditty all along. Check this out:

Climb the stair, and then I say a prayer
For someone who could share my situation,
But instead, as I lay down my head,
I have to leave it all to my imagination…Knock knock, who’s there?
Could this be love that’s calling?
The door is always open wide.

Knock knock, who’s there?
Now as the night is falling,
Take off your coat and come inside.

Hands where we can see them please Mary, there’s a good girl. OK, so it’s no Sugar Walls – but, you know, slippery slope.

No such trouble for Dana the country girl, so pure and sheltered that she even lacked the descriptive language to articulate her innermost desires. (“Dances! Romances! T’ings of der Noight!“) Next to such innocence, the following year’s UK entry from Clodagh Rodgers, Jack In The Box (“I’m going to bounce up and down on my spring!”) looked positively debauched. How far we have come, ladies and gentlemen. How far we have come.