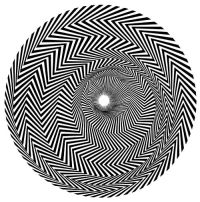 Yesterday, Diamond Geezer talked about the Bridget Riley exhibition at Tate Britain, which ends this Sunday – so I guess this is absolutely my last chance to plug it. (We visited the exhibition over the summer, and both loved it – but I was on Hitzefrei at the time, so said nothing about it.)

Arranged chronologically, the exhibition starts with Riley’s heavy duty monochrome op-art work, with which she made her name in the 1960s. The cumulative effect of these pictures upon the eyes is so physically intense that if you’re not careful, it can actually make you feel slightly sick. Consequently, we both found ourselves staring at soothing patches of bare white wall every now and again, just to calm our poor little eyes down; the optical equivalent of a “palate cleanser” in a posh restaurant.

Moving through to the “multi-coloured vertical stripes” section, our first reaction was disappointment. “Cuh, swizz, nothing’s happening with this lot.” Because by now, we had come to expect every painting to f**k with our vision, Magic Eye style. Maybe, in the early 1970s, this had become a general expectation amongst Riley’s public. Maybe she had begun to feel burdened by this expectation. Maybe this was one of the reasons why she changed direction.

Our favourite section of the whole show was at the point where the strict, formal stripes had progressed into curvy waves, containing twists of colour. Warm, expansive, serene, mature, intensely pleasurable, and vaguely reminiscent of late Monet water-lilies in some inexplicable way.

The subsequent “diagonal cross-hatching” phase – although I loved it 10 years ago, when it provided my initial entry into Riley’s work – now seemed a bit stale, a bit over-familiar, a bit too – dare I say it? – Late Eighties Habitat Duvet Cover. On the other hand, that’s hardly Riley’s fault. Indeed, over the years, she has consistently objected to the way that her work has sometimes been co-opted by the world of fashion and style (in particular by Mary Quant and the mods in the 1960s). It’s strange how these shallow imitations have at times posed genuine threats to the purity and the power of Riley’s original vision.

Next, I would have banged on about the Wolfgang Tillmanns exhibition in the next door gallery, but it’s far too late for that now (it shut a while ago). Excellent in a very different way – and in a way which appealed far more to me than it did to K, what with its sexy sheen of oh-so-stylish, aren’t-we-just-living-the-life, bleeding edge metro-homo fabulousness. Anti-glamour glamour, which finds as much beauty in everyday random rawness as it does in studied, posed artifice.

Some of this work had originally appeared in trendy style mags, such as i-D. Did it therefore even belong in an Art-with-a-capital-A Art Gallery? The simple answer: no-one ever seriously objected to a Norman Parkinson retrospective. Or a Richard Avedon. Or a Cecil Beaton. Like Tillmanns, they all dealt in supposedly transitory images, which were very firmly rooted in their own particular time. And yet, somehow their photographs simultaneously managed both to capture that time (definitively, iconically, fascinatingly) and to transcend it. I would contend that it’s going to be the same with Tillmanns. An originator (along with Jurgen Teller) of that whole anti-supermodel “gritty realism” aesthetic in fashion, I suspect that his work will endure for far longer than his detractors might imagine. But, as I say, no point in banging on about that now.

Right at the end of the Tillmanns exhibition, a video installation piece. Inside a large, pitch black room, pumping techno music blared out. Bloody good pumping techno music, at that. Grade A stuff. Mid-nineties vintage, at a guess. My era, in other words. It drew me in, like a moth to a flame, even as K started nervously looking at his watch. (“I’m not sure we’ve really got time for this…“) The far wall was a giant video screen, showing various images of club lighting. The lights were synched perfectly to the music. The camera never panned down to the crowd below.

I was transfixed. In my disco-biscuit-munching Glory Days, I would sometimes – as so many did – “have a wobbly” early on in the night. A sort of mini-anxiety attack. At times like these, one of my best coping strategies was to tune out from the mashed-up crowd around me, fixing my gaze instead upon the light show. I would then calm myself down by focussing all my concentration on the various complex lighting patterns that were being created, and the way they followed and reflected the music – reminding myself all the while that these effects were being carefully orchestrated by people who weren’t “on” anything at all: the lighting jocks, the DJs, the musicians. These were the people upon whom I would then train all my newly minted “empathy” – the sober, straight, creative ones. I found it deeply reassuring that they were all in charge, quietly directing the madness from behind the scenes. Thus stabilised, I would then eventually train my gaze back down towards the roiling throng around me – and joyfully reconnect.

“I don’t feel comfortable in here at all, Mike. Can we go? The riverbus leaves in five minutes…”

Another, deeper, more enduring level of sanity punctured my reverie. Torn by conflicted feelings of yearning nostalgia and slightly shamefaced foolishness – which I covered up as quickly as I could with self-deprecatory mockery (“Good job you’re here – I’d have been stuck in there for days otherwise, haha“), I stumbled towards the light.