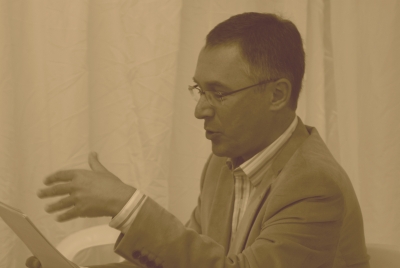 Yesterday’s little blog talk went just fine, thanks for asking. It was a modest turn-out, but certainly enough to make the event worthwhile, and thanks are due to my hometown posse (including JP, MissMish, Rullsenberg and Cloud) for turning up, lending support, and pouring ale down my neck in the pub over the road afterwards.

However, being my own harshest critic and all and all, my immediate post-talk thought was annoyance that I hadn’t managed to squeeze all my material into the allotted 45 minutes. As it was, I spent too long on the first half (essentially a 2007 remix of the talk I gave at Broadway Cinema a while back), and ran out of time to get stuck into the all-new second half, thus spluttering to a rather abrupt halt. Which was a shame, as the second half was all about bloggers and book deals, and the differences between blog writing and novel writing, and I’d spent a long time researching and assembling the material. In fact, it was the second half which I was looking forward to the most. Lesson learnt: do a timed run-through in advance, and chop your material accordingly. (I did this last time, but got a wee bit too complacent this time.)

That said, the talk went well, and I managed to strike the right balance between scripted and off-the-cuff material. It would also have been fun to have extended the Q&A session at the end, which did give me the chance to shoe-horn a couple of sections from the overly abridged second half. And it was good to meet Sally Morten (one of the Shaggy Blog Stories contributors), as well as a previously unknown regular reader (who asked me some rather penetrating questions about blog stalkers, before re-assuring me that his presence at tomorrow night’s Ted Leo & The Pharmacists gig didn’t mean that he was one of them, ahahaha, dear me no, thanks for reading, see you at the gig).

I left Lowdham with a very strong urge to do this sort of thing on a more regular basis, preferably with at least a 60 minute timeslot. So, readers, if you’re hiring, then I’m ready, willing and able…

Anyhoo, since I promised to do this yesterday… for the benefit of those who turned up, here’s a quick link-list of various points arising.

· Technorati: The State of the Live Web, April 2007.
· The “Online Disinhibition Effect”.
· Heather Armstrong on being “Dooced”.
· The Bloggies: 2007 Weblog Awards.
· Bloglines: personalised site feed aggregator.
· Hallam Foe: official blog for the forthcoming movie, which received a special preview screening for bloggers last month.
· Belle De Jour – the first UK blog-to-book success story.
· Girl With A One-Track Mind and Petite Anglaise – bloggers turned writers, whose stories both made international headlines in 2006.
· E-mail from Nicholas Hellen of the Sunday Times to Abby Lee (Girl With A One Track Mind).
· Random Acts Of Reality: ambulance worker’s blog, now available in book form.
· The Policeman’s Blog – another “job blog”, now available in book form.
· Wife In The North: offered a £70k book deal less than 6 weeks after starting her blog. (News story in The Times, February 2007.)
· The Friday Project: independent publishers who specialise in the blog-to-book market.
· Lulu.com: self-publishing service.
· The 2007 Lulu Blooker Prize: literary prize for blogs-to-books, aka “blooks“.
· Shaggy Blog Stories: self-published UK blogging anthology, conceived and executed in seven days, to raise money for Comic Relief.
· Post of the Week: set up by myself and others, in order to promote great writing on personal blogs.
· Felicity Lowde sentenced to six months’ imprisonment for online harrassment of blogger Rachel North: BBC news story; Times news story; Rachel North’s reaction; interesting background article on Lowde and “Narcissistic Personality Disorder”.
· Blogger.com: allows you to set up your own blog in minutes, at no cost and with no technical know-how.