This is unexpected, to say the least. In my (possibly nostalgia-addled) memory, 1984 was the final year of a protracted Golden Age which started with Heart Of Glass and Hit Me With Your Rhythm Stick, peaked with Relax and Two Tribes, and ended with Do They Know It’s Christmas and You Spin Me Round (Like A Record). Sharp, sussed pop music, with wit, style and substance. To say nothing of all the fantastic early 80s soul/funk/late disco/early electro which had me bopping round my boom box in my fluffy white towelling socks.

So why was almost none this represented in our sample Top Ten? The preposterous Rockwell, the condescending Billy Joel, the borderline-offensive Lionel Richie, the whining Nik Kershaw, the patently counterfeit Break Machine, the anodyne Kool & The Gang… this is not the 1984 which I eagerly documented each Tuesday or Wednesday with my own personal top forty (yes, forty) of current favourites. On the strength of this pitiful evidence, it’s a wonder that the 1980s even managed to climb as high as third place. This was only achieved on the strength of the remaining four songs (It’s Raining Men, 99 Red Balloons, Jump, Relax), all classics in their own way, which between them picked up 19 points out of a possible 20.

No, this wasn’t my 1984 at all. Perhaps I should check those old handwritten personal Top 40s once again. Let’s see what was really rocking my world twenty years ago – and let’s hope that it’s not too embarrassing. 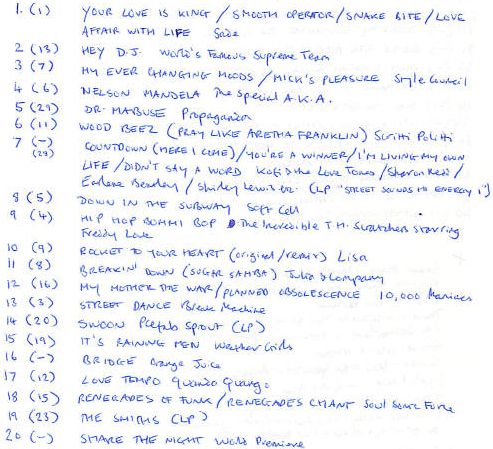 Hmm. Tolerable – distinctly tolerable – if a little Wine Bar in places. (Look, Sade was on the front cover of The Face! We didn’t know any better!)